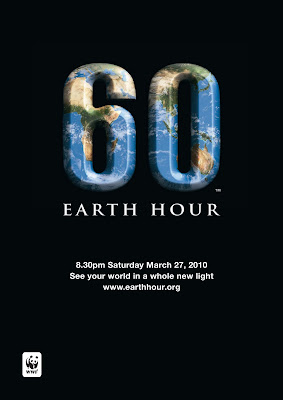 observing Earth Hour is one such initiative. as the about Earth Hour page puts it, “Earth Hour started in 2007 in Sydney, Australia when 2.2 million homes and businesses turned their lights off for one hour to make their stand against climate change. Only a year later and Earth Hour had become a global sustainability movement with more than 50 million people across 35 countries participating.” i remember reading in a news report that the city of New Delhi saved around 600MW of power during that one hour last year.

but the Earth Hour is more than only saving power and reducing one’s electricity wastage. it is an example of how a simple task like switching off unnecessary electrical appliances can bring about a global level change. it is a proof that common individuals can also take an active part in creating the future of this world. and it shows that all is not lost, that in this collective, self-imposed darkness, we’ve ignited a hope for the future of earth, our home.

promise me, my dear friend, that you will celebrate the Earth Hour next year also 🙂