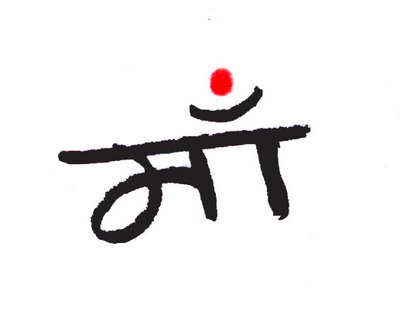 Mother, as I write in Hindi, my mother tongue. This week’s topic at illustration friday, is sacrifice.

I asked around in the office too. Rashmi suggested a portrait of ‘Bhagat Singh’, one of our most revered freedom fighters. Somu said, “I would’ve drawn something abstract.” While Bandhu declared giving away his bottle of Saturday-liquor will be the ultimate sacrifice!!!

I ‘wrote’ it with a black colored pencil. Scanned it in photoshop at 300dpi, made a jpeg & uploaded it here. With a little help from Somu, I converted the RGB pixels to single color black leaving the red dot above.

The red dot above represents the auspicious mark of marriage Hindu women grace their forehead with. It is called a ‘Bindi’ in Hindi.

Hope it turns out good.

Psst… somehow i can’t view my blog. I can access it, post the posts, edit them, but can’t see the actual blog. So, starry nights, phebes, thanks for the comments here instead.

10 Responses to "IF- SACRIFICE"