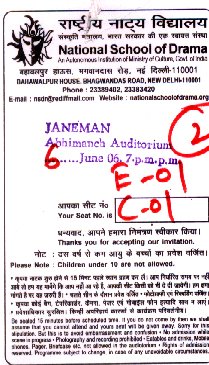 that’s the play i went to, this tuesday evening at NSD, the National School of Drama. in an ongoing theatre festival featuring the best talent from NSD stable.

all credit to apsy. she took the initiative so that i could move my lazy bum & have an evening away from the office. the promise of free tickets was motivating anyways.

liked the play though. what 12 years of school education couldn’t do to my vocablury, this one evening did. learned a whole bouquet of abuses and sayings which made sure that my bedtime prayer consisted of a plea of forgiveness to both G’s. that is god & gandhi ji.

the story was about the life n times of a group of eunuchs. how they become what they become, (child abuse was stated as the major factor in them turning gay & later an eunuch) what they go through, in life & death and in their living death. pretty social message kinda stuff. m not trivialising the message here, but the story was a little stretched out and we felt that all this could’ve been said in half the time. anyways, moving, made-you-think message.

now the good part. the acting was damn good. brilliant. excellent. i marvelled at the voice clarity of these people.

the make up was superb too. for a few minutes in the beginning, we couldn’t realise they all were men, which infact they were suppossed to be anyways. and by the way of facts, even their mother wouldn’t have recognised them and if by any chance she did, she would have died by the shock-of-her lifetime. that good was the make up & costume. najjo nayak, basanti, bulbul, julie, shiela… aammi.

the set design, how it changed in a few seconds of darkness, and life again come to life.

the lighting was truly wonderful also. ‘mood-lighting’ earned an absolutely different meaning in my mind. the way they depicted various emotions through a single flick of light was hugely, majorly incredible. (i don’t know what najjo nayak would say on my this-profuse use of adjectives.) red for anger, blood, gore, death; a shade of blue for nightime and another to highlight the anguish of a character; and bright spotlights for humour & bringing out the deepest reflections in a character’s mind. every emotion clearly, very clearly displayed right to the throbbing of a vein on a tortured face.

in a way, i’ m also more scared of theatre now. all my life, i’ve sufferred from stage fright & yet wanted to act from the deepest core of my heart. before this, theatre was only in theory, i saw the practical for the first time. taking part in school plays was lot more easy adi.

but i relished it also. there comes a certain joy of accomplishment from a job well done, and i could clearly read it on the performer’s faces. an actor lives for the act, but the applause makes him go die for it.

am hooked for more.