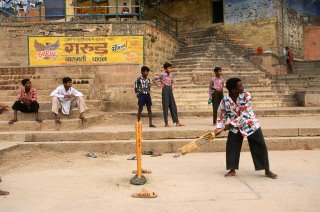 this is what cloudy said in her reply to my post

“Adi, glad that I brought back childhood memories… that’s what this blog is for! Do write about the innovations you made as you played cricket – either out of necessity (no bat available, so just use hand) or just for fun! I have to reach 101 ways, you see – and I can do that only with a little help from friends 🙂 “

and this is what i posted back…

i don’t know much about innovations, all we did was to play cricket in every possible or impossible place and with anything that we might lay our hands upon. it was a time when playing was much more important than winning, losing or scoring runs or taking wickets. the pleasure we got from taking that bat in our hands and playing outside in the scorching may sun was really undefinable.

it was mandatory for the ball to be round though. leather balls (expensive & hard hitting), tennis balls (cosco-inexpensive, soft & favourites), plastic balls (anda-very noisy & unpredictable), rubber balls (kirmich-for kids only) and if nothing else worked, me n my brother would crumple up a few newspapers, squeeze them very tightly with the help of rubber bands and voila an indigenious work of art was ready. it tend to come in shape after a few beatings.
point to be noted, meant for only verandah-play but the least expensive & noiseless option of all. what’s more, it could be made water-proof by wrapping a sheet of polyethene over the squeezed newspapers. that increased the longevity from few matches to a complete tournament.

as for the bat, i’ve played with the usual proper cricket bats. both inexpensive and very expensive kashmir-willow bats. but the real fun was when it had rained outside or nobody was available to play with.
any heavy long-notebook (a register) or table tennis racquet or badminton racquet or a flat n wide enough stick or bare hands if nothing else was available donned up the hat to be the bat. but the best one was the maid’s cloth-beating wooden ‘thapi’. it had the perfect shape, size n necessary solidity to make all of us realize the dreams of becoming another ‘tendulkar’.

there were perfectly logical rules too, like ‘one-tip’ out. which means if the fielder catches? the ball after a single bounce the batsmen will be deemed out. when you dont have the space to bamboozle or bounce the batsmen, this was the most important rule ever devised. just keep it straight, a little short-of-length, and u became the highest wicket taker ever in domestic cricket tourneys 😉

if nothing else, book-cricket was always there.

One Response to "kricket kontinued…"