posted by adee on 12/01/2011 in India
“Take up one idea. Make that one idea your life – think of it, dream of it, live on idea. Let the brain, muscles, nerves, every part of your body, be full of that idea, and just leave every other idea alone. This is the way to success.” – Swami Vivekananda. 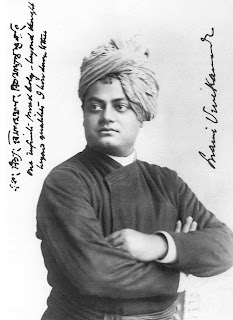 It is Swami Vivekananda’s birth anniversary today. But does this matter to we the facebook, twitter generation of young Indians? Pity is, many amongst us don’t even understand what he was and what he did for our nation, for our spirituality. That our government has labelled this day as National Youth Day is ironic at best!

I’ll keep this post short, very short. All i would request you, my young friends is to study some works by him. Because if you are an Indian, if you’ve to know and understand the idea of India, and if you are interested in the spiritual aspect of Hinduism (though you don’t have to be a Hindu to appreciate him!) you’ve to know, understand, study, the life and works of Swami Vivekananda. I’ve read some of his works, that’s why i can say this with surety.

And maybe, by the time we celebrate the next youth day, we’ll have better understanding of him and his contribution towards the making of India.

6 Responses to "Swami Vivekananda and the social networking generation"