The Taj Conspiracy: The Indian Da Vinci Code OR a political statement in disguise of a thriller? 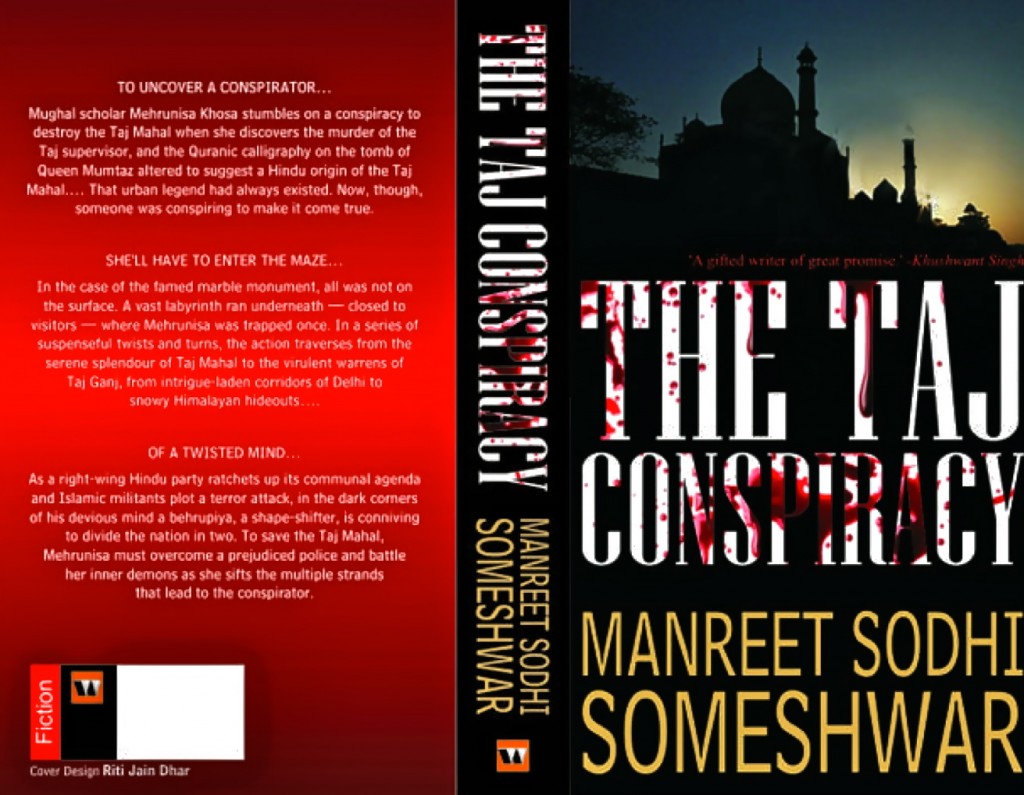 At the center of this story by Manreet Sodhi Someshwar is the concept of a ‘behrupiya’, a shape-shifter and almost everyone sports a dual identity. Like the famed Da Vinci Code, this story also starts with a murder and takes many twists and turns through conspiracy theories, urban legends and religio-politico themes. Through this last bit, the author also adds her take on the right, left and center of the not so relevant Indian politics of today. And it is here that I think it loses its mojo as a thriller.

The plot is fairly simple and much of it is revealed at the back of the book in the blurb itself. “Mughal scholar Mehrunisa Khosa stumbles on a conspiracy to destroy the Taj Mahal when she discovers the murder of the Taj supervisor, and the Quranic calligraphy on the tomb of Queen Mumtaz altered to suggest a Hindu origin of the Taj Mahal… That urban legend had always existed. Now, though, someone was conspiring to make it come true.”

What keeps you engrossed throughout is the impending revelation of who the real killer or ‘behrupiya’ is and that moment actually is the pinnacle of the story. Sadly, the story thereafter doesn’t do justice to the build-up and ends up in an almost Bollywoodish burlesque. It feels as if the author used all her energy in the build-up and now was keen to tie all the loose ends a bit too quickly.

The three main characters of the story are well developed, Mehrunisa Khosa, the protagonist the most. She not only has a scholarly interest in the Taj but also finds the monument as an anchor in her widely travelled and lived across the world life. The fact that like the Taj, she also has an Indo-Persian lineage boosts her intimacy with the fabled monument. So when she discovers that something is wrong with it, she makes it a personal mission to uncover the conspiracy. In this, she is ably supported and guided by the notorious but honest police officer RP Singh. Ms. Someshwar has ably portrayed the life of a top-cop from the Naxal infested jungles to the political corridors and the by lanes of Taj Ganj. The third character is of the killer whose revelation as I said is the high point of the book. But sadly, rest of the characters come out primarily as cardboard characters laden with clichés. Especially for her political characters, the author has taken the liberty to copy individuals from mainstream Indian politics almost as it is. As the narrator of the story, these characters reflect her views on what is right and what is wrong in Indian politics and I sensed a strong tilt against anything or anyone related to right wing politics. To somehow balance these views, she also builds in the specter of Islamic fundamentalists aiming to harm the Taj but they retreat without playing any role in the story. I hope in her forthcoming novels, she creates a strong supporting cast with shades of grey instead of individuals with plain black and white character traits.

All said and done, there was one thing that I missed the most. It is a book based on the Taj Mahal and as the focal point of the story, there should have been some bit devoted to the beauty of the monument. Amidst all this conspiracy, Ms. Someshwar had the chance to build upon the tragic beauty of the Taj and made us stand strongly by Mehrunisa’s side. In this conspiracy against the Taj, the real beauty of the Taj was lost and perhaps that is the real tragedy of this story.

That apart, I feel it is a good one-time read for those who are looking for light reading. I won’t say it’s ‘the Indian thriller’ that we were all waiting for, but there are glimpses that the coming novels in the series will find an eager audience.