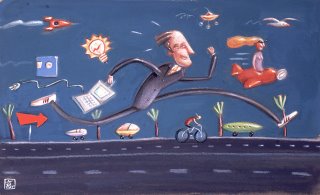 hmmm…. it feels nice, people actually taking time to read whatever you post, and actually commenting on that, thanks obi wan and thanks shadows.

left at 3am, ‘abhijeet’-the dear client had to deliver the layout to his office, and as i was getting a ride back home, half an extra hour didn’t matter that much. reached home at around 3:30. and as i’d suspected, nobody opened the gate despite my repeated shoutings, bangings and pleadings. actually, i’d told ‘ma’ i’ll be back by 12 to 1, and the good pativrata nari she is, she made ‘pa’ sit whole night waiting for me. and when i reached home, poor ‘pa’ had dozed off.

so, on the stairs outside the gate at 3:30am i remembered ‘dee’. she was the first one who came to my mind. i messaged her about my plight, and voila, i got a reply instantly. had no idea she was still awake. she’d to do some urgent presentations today. and then she called. god, i could have talked to her for ever then. thanks ‘dee’. u r a gem of a friend.

shadows, a marathon? and then u complain me not writing much. good for apsy. swot will take time, so the 50 items too. and the best thing is that, i seem to have misplaced the ‘creative journal’ i carried around, wherein all the to-do lists and poems were written. ‘dudo’ is the girl i’ll miss forever now. don’t wanna talk about that. and last, take it ‘easy’ buddy;)

obi wan, to-do lists are extremely energizing for me. they make me believe that atlast i’ve got hold of my life. its another thing, i never come around completing even 25% of those. as for ‘chandrakanta’, why was that not on your list? the greatest mystery-indrajal-tilism epic ever written in hindi, how could you have missed that. and ‘santati’ ah, if there ever was a sequel better than the original, it was this. i first read it when i was 12. then an uncle took it away. then, after a couple of years i purchased another version from the world book fair. this time around the 10th boards examination. papa says, chandrakanta is responsible for me missing my distinction.

am at the office, talking to bugs on one hand and typing this out.

i don’t like this month of april, it stretches too long. and it begins with a fool’s day.

some very bad things are happening to me. I don’t know whether I’ll be able to post something or not for a few days.