thinking about sunday on a monday morning 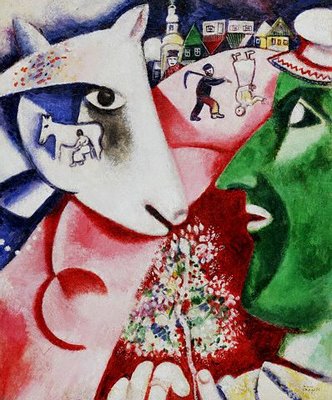 hmmm…
sunday was a good day. in totality & in its many individual pieces.
was at home till 12. thought a lot about what i’ve been thinking these days. but being a stickler to details, i miss the forest for the trees. & sometimes when i see the forest, i bump into those very trees. result? i’m still confused about what to do, when i need not be. nobody thinks about his or her life in such detail as i do and still feel confused. hey Bhagwan, mera kya hoga?

went to meet Amul. it takes around 1.5 to 2 hours by bus to reach ‘Rani Bagh’ from my place. i utilised it well by ‘thinking BIG’. chose a blue line bus over a dtc one. because it takes more time. actually much more than it should be allowed. but i’d to read.

the second test match between India & England is on. today is the last day. we were within sniffing distance of victory as the commentators say. till this morning, 8 wickets have fallen, and we are truly looking at victory now. it seemed highly improbable at one time because of nearly two days play lost thanks to bad weather. (i think my language is being really affected by Sidhuism)
and what a match that was. between Australia & South Africa. whooping, humongous, a CNN-IBN headline was fully apt, ‘First Australia wrote history & then SAF re-wrote it’. just think of it, 434 runs scored by the aussies and the proteas responded by a magnificent 438 off the penultimate ball.

no Sachin, no Gudiya meant it was a quite bored afternoon. Sachin sa’b is out on his trip to ‘Mata Vaishno Devi’ temple in Jammu. will be returning on the 15th. Gudiya is busy with her exams. she is our little sister whom God chose to gift Amul as a sibling. and spared us of her tantrums. 😉

now what do you do on a boring sunday afternoon? Amul utilised his time wisely, cleaning the cd player he hasn’t cleaned since buying. and afterwards practicing surgery on all the remotes in the household. i preferred to read the resultant notes of last week’s internet surfing, printed by amul at his office.

had lunch at 4pm, went out to ‘experience’ RDB once again. better not say ‘watching’ it. Amul saw the movie for the first time and he was impressed. more so ‘churned’ inside. of all the people I’ve met, he had the more balanced view of the movie. if only ms. anonymous could share her views on the movie…
oh! and my phone is still on. that scoundrel has been keeping it on and we ringed him repetitively. also messaged him to return the phone as it’ll be of no use to him. will wait till afternoon to completely block the number or transfer it to a new phone.

the day after tomorrow is Holi. i don’t normally celebrate it, but this time it might be different. and my introspective, mind ‘manthan’ is still on.

adi
from a little window to the world
11:20am

note: Image is ‘I and the village’ by Marc Chagall
created in 1911
© Philadelphia Museum of Art/CORBIS

2 Responses to "thinking about sunday on a monday morning"